"An Eyeball…Fell Down into My Lap"

“An eyeball…fell down into my lap, and that is gross!” exclaimed Dr. Uta Landy, the founder of Planned Parenthood’s Consortium of Abortion Providers (CAPS), a speaker at the National Abortion Federation (NAF) conference. The audience laughed.

A newly released video of the Center for Medical Progress (CMP) taken at the National Abortion Federation (NAF) conference, like previous videos, exposes the nature of the abortion industry, and its callousness towards human life, and those whom they claim they “serve.”

“…[T]he fetus is a tough little object, and taking it apart, I mean taking it apart, on day one is very difficult,” relates Dr. Susan Robinson, an abortionist at Planned Parenthood Mar Monte, who demonstrates how she uses forceps to pull babies apart during abortions. 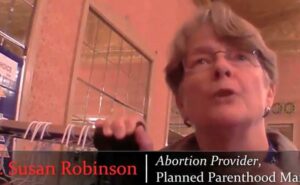 “You know, sometimes she’ll [fetal parts buyer] tell me she wants a brain, and we’ll, you know, leave the calvarium in ’til last, and then try to basically take it, or actually, you know, catch everything, and keep it separate from the rest of the tissue so it doesn’t get lost,” taught Dr. Deborah Nucatola, who described in this video how she beheads babies so their skulls and brains can be sold. In earlier videos, Dr. Nucatola casually discussed various abortion techniques used to better obtain fetal body parts that are of the “quality” necessary to sell.

The Deputy Director of the ACLU Reproductive Health Freedom Project, Talcott Camp, exclaimed that, “When the skull is broken, that’s really sharp! I get it! I understand why people are talking about getting that skull out, that calvarium.”

What “stuff” would they be talking about? Baby clothes? Diapers? Or parts of babies?

And let’s not call them “baby body parts.” They are referred to as “fetal tissue.” What is a “fetus”? A fetus is not some special species. This term does not identify what a living organism is. It is simply a stage of development. An unborn baby is not a fetus; he or she is just at an age that we refer to an individual as a fetus, similar to referring to someone as toddler, teenager, young adult, adult, and senior citizen.

But what other “stuff” can we harvest and sell? 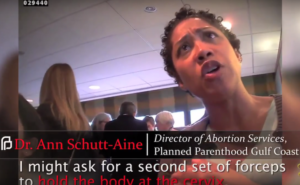 A partial-birth abortion is conducted by delivering a live baby, but assuring that its head is not out of the birth canal. Inserting scissors into the base of the baby’s skull, its brains can be sucked out, prior to removing the rest of the head. The law banning such a procedure was upheld by the Supreme Court in Gonzales v. Carhart in 2007. However, other methods of abortion are still legal to destroy an older, unborn child.

“If I’m doing a procedure [a partial-birth abortion], and I’m seeing that I’m in fear that it’s about to come to the umbilicus [naval], I might ask for a second set of forceps to hold the body in the cervix,” explained Schutt-Aine. “[I’ll] pull off a leg, or two, so it’s not a PBA [partial-birth abortion].”

“There’s a lot of clinics that we work with that, I mean it helps them out significantly,” explained an unidentified StemExpress employee about this technique to avoid the law against partial-birth abortion.

As exposed in the previous videos, StemExpress is one of the brokers who help Planned Parenthood market baby body parts.

“It’s not a matter of how I feel about it [the baby] coming out intact, but I gotta worry about my staff and people’s feelings about it coming out looking like a baby,” worries Dr. DeShawn Taylor, previous medical director of Planned Parenthood of Arizona.

“We have the people who do our paperwork for the fetal death certificates; they email us calling them ‘babies.’ Baby this, baby that, baby so-and-so, and I’m like, that’s creepy!” Dr. Taylor reveals. She continues: “In Arizona, if the fetus comes out with any signs of life, we’re supposed to transport it…to the hospital.”

In response to the CMP investigator asking if there is “any standard procedure for verifying signs of life,” Taylor casually responds: “Well, the thing is, I mean the key is you need to pay attention to who’s in the room, right?”

As pointed out by David Daleiden, the only difference between the methods of how Planned Parenthood kills unborn children and the abortion techniques used by Dr. Kermit Gosnell is that “Gosnell was not so careful as to ‘pay attention to who’s in the room.'” 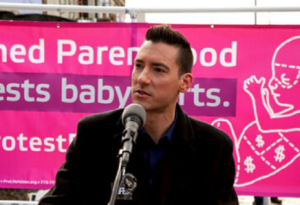 As summarized by lifenews.com, the previous 12 videos:

“The public knows the real criminals are Planned Parenthood and their business partners like StemExpress and DV Biologics – currently being prosecuted in Orange County – who have harvested and sold aborted baby body parts for profit for years in direct violation of state and federal law. I look forward to showing the entire world what is on our yet-unreleased videotapes of Planned Parenthood’s criminal baby body parts enterprise,” responded David Daleiden.

It is noted that David Daleiden also had criminal charges brought against him in Houston, Texas, and as a hearing date approached, the prosecutor (a longtime public supporter of Planned Parenthood) was smart enough to abandon the fake criminal charges prior to being made a fool of in a court of law.

Only last January, a Congressional panel of the U.S. House of Representatives recommended numerous criminal referrals against Planned Parenthood. California’s Orange County District Attorney is pursuing action against two companies for their involvement in the marketing of fetal body parts. One of those companies, StemExpress, was held in contempt by Congress last year for its refusal to comply with this investigation, reports The Wanderer, a national Catholic newspaper.

“The right to privacy is a cornerstone of California’s constitution, and a right that is foundational in a free democratic society,” explained Attorney General Xavier Becerra. “We will not tolerate the criminal recording of confidential conversations.”

Where in California’s constitution is there a right to privacy? Where is it stated in the laws of California that it is a foundational right in a free democratic society? When are criminal charges based on someone’s political rhetoric? When is it a crime to record a conversation when no one at the time claimed or thought that it was confidential?

Were any of the videos of confidential conversations? In fact, most of the conversations were anything but private. One of the first videos took place at a restaurant at which Dr. Nucatola was eating a salad and drinking wine, while she discussed “crush above” and “crush below” procedures to obtain valuable body organs, so that she could kill the baby without ruining the baby’s commercial value. Waiters and other patrons were well within earshot. In the latest video, the discussions were either public or made on the convention floor where one could view lots of people standing near and walking by while the conversation was being videotaped.

It has been recently disclosed that U.S. District Judge William Orrick, who had issued a gag order preventing the release of the videos, has served on the board of directors of an organization that houses a Planned Parenthood clinic.

As reported by lifesitenews.com, Judge Orrick is a former board member of Good Samaritan Family Resource Center (GSFRC), having served as its secretary in 2001 when it entered a “key partnership” with Planned Parenthood of San Francisco. Attorneys for CMP filed a motion seeking the removal of Judge Orrick from this case.

“At no time did Judge Orrick disclose to Defendants that he sat on the board of an organization that had as a ‘key partner’ an organization Defendants alleged, both in public statements and as part of their defense, was involved in violations of state and federal law,” CMP’s motion continues. “Judge Orrick did not disclose his close and longstanding relationship with an organization that houses a facility and hosts Planned Parenthood staff, whom NAF [National Abortion Federation] claims are in physical danger from ‘anti-abortion extremists’ indicted by Defendants.”

As The Federalist’s Mollie Hemingway uncovered, “He also donated more than $5,000 to GSFRC.” “He raised at least $200,000 for Obama and donated $38,800 to committees supporting him, according to Public Citizen,” reported Hemingway.

One of the teams of attorneys leading the courageous defense of David Daleiden is the Thomas More Society president, Tom Brejcha, and one of their top litigators, Matt Heffron, who was our speaker last year at the Celebration for Life. Consider sending them a note of encouragement, along with financial support (Thomas More Society, 19 S. LaSalle St., Suite 603, Chicago, IL 60603, web: thomasmoresociety.org).

Although the Republican congressional leadership promised to defund Planned Parenthood, they, even though they control both the Senate and the House, have failed to do so. Why is it so difficult to defund Planned Parenthood? Could it be that a percentage of the millions of dollars it receives from the government is reinvested in electing those, in both parties, who will continue the flow of taxpayer money to this abortion giant?

“From day one, President Trump has worked to keep his pro-life promises, including stopping taxpayers from being forced to fund abortion and abortion businesses. We’re encouraged to see that the budget released today prevents federal funds from going to the nation’s largest abortion chain, Planned Parenthood,” said Susan B. Anthony List President Marjorie Dannenfelser. “Taxpayers should not have to prop up Planned Parenthood’s failing, abortion-centered business model.”

As most people can well remember, President Obama, Hillary Clinton, the Democratic Party, and the mainstream pro-abortion news media, promulgated the lie that if funds were cut from Planned Parenthood, it would be unable to do mammograms. However, as it was soon pointed out, none of the Planned Parenthood affiliates have a single mammogram machine to x-ray for breast cancer. The truth of the matter is that its “breast exams” are simply a check a woman could easily do on her own.