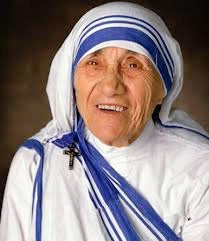 On September 4, 2016, the Catholic Church declared what the whole world had long known, that Mother Teresa of Calcutta is a saint. Never afraid to speak the truth, especially to those who held positions of power, Mother Teresa traveled around the world condemning abortion. In her acceptance speech of 1979, the Nobel Peace Prize winner courageously stated: “The greatest destroyer of peace today is the cry of the innocent unborn child. For if a mother can murder her own child, in her own womb, what is left for you and for me? To kill each other. Today millions of unborn children are being killed, but we say nothing.”

“By abortion, the mother does not learn to love, but kills even her own child to solve her problems. And by abortion, the father is told that he does not have to take any responsibility at all for the child he has brought into the world.

“So abortion just leads to more abortion. Any country that accepts abortion is not teaching the people to love, but to use any violence to get what they want. That is why the greatest destroyer of love and peace is abortion…

A news reporter once remarked to Mother Teresa that all her efforts were not successful in eliminating poverty in Calcutta. To this she replied, “Jesus did not call us to be successful, but to be faithful.”

For over 44 years Northern Kentucky Right to Life, as well as numerous other pro-life organizations, has labored to stop the American Holocaust: abortion.

Have pro-lifers eliminated abortion? No.

Have pro-lifers been successful? In many ways, yes. Because of ongoing efforts (education, changes in the law, continual prayers, sidewalk counseling, pregnancy centers, public demonstrations, countless pro-life literature and films), a number of children’s lives have been saved from the hideous crime of abortion, and many young mothers will not have to live with the painful memory of having once destroyed a child who was living within them.

But have we been totally successful? No.

But God will ask if we have been faithful, totally faithful! This is a question which each of us will have to answer when we stand before Him.