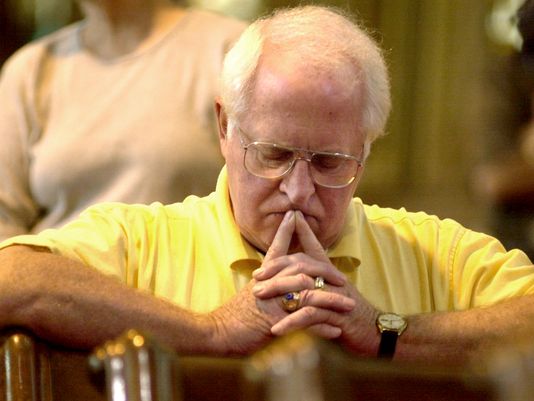 “Bob led formidable efforts to educate, legislate, and demonstrate against all offenses to the sanctity of human life,” said Paula Westwood, Executive Director, Right to Life of Greater Cincinnati.

“He inspired and encouraged many to stand vigilant for uncompromising human life protections no matter what the cost.”

Bob led Northern Kentucky Right to Life since its founding in 1971. He has litigated, spoken on, and written about the bioethical issues of our times, notably in his book That Reminds Me of a Story: Reflections of a Pro-Life Warrior.

Bob ensured a still-existing block of pro-life elected officials in Northern Kentucky, monitoring legislation affecting human life protections in both Kentucky and Ohio, as well as nationally. He was one of the founding members of Helpers of God’s Precious Infants Saturday prayer vigils in front of Cincinnati Planned Parenthood’s abortion headquarters on Auburn Ave., which still continue.

In his book review, Mitchell Kalpakgian, Ph.D., said in reference to Bob, “A pro-life warrior seeks the truth, loves the truth, defends the truth, and suffers for the truth in imitation of St. Thomas More who never valued human respect, ‘the most pervasive sin in the world today,’ above God’s absolute truth.”

Robert C. Cetrulo, age 81, a lifelong resident of Northern Kentucky, passed away on Thursday, October 27, 2016. He was born on February 13, 1935, to Camillo and Estelle (McGrath) Cetrulo, and educated at St. Benedict Grade School, St. Xavier High School, Xavier University, and the University of Kentucky College of Law where his academic record resulted in his selection to the editorial board of the college’s scholarly quarterly publication, The Kentucky Law Journal.

He was a long-time prayer witness in front of Planned Parenthood Abortion Clinic in Cincinnati, OH, and a founding member of Helpers of God’s Precious Infants, which prays there four Saturdays a month.

Mr. Cetrulo’s professional career included, in addition to his years as an advocate in the trial courts, 15 years service as U.S. Magistrate Judge for the Eastern Judicial District of Kentucky. He also served 15 years as an Instructor in Political Science and Constitutional Law at the University of Kentucky Northern Community College, as well as a lecturer at the Salmon P. Chase College of Law and multiple bar association and pro-life conventions, and many years on the Editorial Board of the Kentucky Bar Association Journal.

In addition to authoring many articles in legal and pro-life journals, and as a reporter for the Kentucky Enquirer while he was an undergraduate student at Xavier University, he is the author of a book, That Reminds Me of a Story: Reflections of a Pro-Life Warrior. The book was the product of the recommendation of his godson, Danny Egan, and others, and weaves together his legendary storytelling ability, with his detailed knowledge of the pro-life movement, both locally and nationally, dating back to 1971, even before the Supreme Court decision of Roe v. Wade, and comprehensively covering the various topics of abortion, euthanasia, cloning, assisted suicide, human experimentation, and all of the increasing attacks upon the sanctity of innocent human life.

The author of the Foreword to the book, Fr. Roger K. Arnsparger, captured the heart of the book as follows: “His storytelling ability is famous in his often-stated ‘That reminds me of a story.’ You will find the stories of great advantage to seeing the flawless logic and principled conclusions which the author exposes for the reader. It is this expression of truth which is the core value of the book and the strongest weapon of the pro-life movement. We are all grateful for his contribution of this book.” Noteworthy are other brief commentaries on the jacket of the book by eminent pro-life leaders throughout the United States: “I don’t know how the Lord chooses his Prophets. I only know that Bob Cetrulo is one of them. I am grateful for people and prophets like him. He will always be in my grateful heart and prayers.”

Fr. John Powell, S.J., author and pro-life activist. “Bob Cetrulo is no friend of the Enemy. I have great appreciation for his guidance and for all he has done and is doing for Life.”

Charles Rice, professor emeritus, Notre Dame Law School, author and pro-life activist. “The stories are heartbreaking at times, and at other times exhilarating. This is a must read for every caring American.”

Mrs. Judie Brown, President, American Life League. In his more than 40 years’ active involvement in the pro-life movement, he has donated his services as a speaker, lobbyist, prayer witness, and attorney in pro-life cases in the state and federal courts, locally, and through the Kentucky Supreme Court and indeed to the U.S. Supreme Court.

His second book, On The Gift of Life, From Eden to Eternity, published in 2015, presents a broader view of the life issues – What brought us to where we are and where we are going. A landmark Pro-Life judicial decision which he accounts as the greatest blessing of his legal career is a ruling of the U.S. Court of Appeals in which he secured the reversal of the lower federal court which had fined Pro-Life attorney James Condit in connection with his volunteered representation of peaceful Pro-Life pickets in front of the Planned Parenthood abortuary in Cincinnati.

The appellate court published opinion (Davis v. Crush) upheld the constitutional freedom of expression and condemned its oppressors as “Ku Klux Klan tactics.” Since that 1988 court decision, peaceful prayer witnesses have been protected.

Among the many awards and honors received by Mr. Cetrulo, there are two most dear to his heart. Pro ecclesia et pontifice (“For the Church and the Pope”), the highest award conferred by the Catholic Church upon members of the laity, was conferred upon him by Pope Paul VI, at the nomination of the then Bishop of Covington, Most Rev. Richard H. Ackerman.

A recent Father’s Day message was sent to him by a group of his children: “Dad, you go about your life doing the things that need to be done with a firm and steady hand. Those who know you know the strength that lies hidden just beneath the surface, the character that makes you the kind of man who can be depended upon and trusted…You reflect the qualities that everyone wishes a dad would have. So thanks, Dad – you really are the best.”

In retirement, after 48 years in the legal profession, he continued regular ongoing activities in the right to life movement, including publishing and lecturing at the annual conference of the University Faculty for Life. He participated in pilgrimages to the Holy Land, and other sacred sites in Italy and Ireland, and resumed an old practice of lap swimming multiple days each week, begun over 60 years earlier when he was a member of the St. Xavier High School city championship swimming team.

He also undertook guitar lessons, and recorded a two-disc set of 70 of his favorite songs, entitled Some Reflections on Faith, Family, and Tradition, for distribution to family members and friends, & co-produced, with his Italian teacher, a DVD of Italian lessons.

Although he enjoyed golf, his very favorite hobby activity was boating and water skiing at Lake Cumberland, where the family maintained a summer home for 25 years.

Bob regarded as one of the highest achievements of his retirement time his participation in the completion for publication of the last volume of the epic series by Dr. Warren H. Carroll, History of Christendom. When Dr. Carroll died with his Volume 6 incomplete, his widow, Anne W. Carroll, a teacher and accomplished published historian herself, contacted Bob for editing assistance and indeed substantive contribution in light of his 40 plus years firsthand and intense participation in the Pro-Life Movement. Anne accepted Bob’s suggestion that the last chapter of this account of the 20th Century be devoted exclusively to these issues, and be captioned “The Revolution Against The Human Person: The Ultimate Crisis of Christendom.” Anne’s high regard for Bob is reflected in her inscription: “To Robert Camillus Cetrulo, A Pro-Life Warrior (and assistant editor), with sincere gratitude and admiration. Anne W. Carroll.”

The following two stories were among Bob’s favorites:

(1) A friend confronted Bob with the challenge that his advocacy of the sanctity of human life could be more effective if he were more tactful. Bob’s response was trifold: (A) “You’re right, and, believe it or not, I’m prayerfully trying to improve. (B) There are surely many who could do a better job than I – but they aren’t getting involved. (C) There was one who did it perfectly, and they hanged Him on a cross. It is clear that it is not the messenger that is hated, but the message!!”

(2) A story told by Bob’s favorite Pro-Life hero, Constitutional Law Professor Charles Rice about 3 men who were paying their respects at the open coffin at a colleague’s wake, asking what each would like to be said at his wake. The first said he’d be pleased if it were said of him that he was a good husband and father. The second said he would like it said that he loved God and tried to live his life accordingly. The third stated “Look, I think he moved!”

Bob’s wish was that he would be remembered with charity and a prayer: “He tried!”

Middendorf Funeral Home of Ft. Wright, KY is serving the family. Visitation will be held at St. Agnes Church, 1680 Dixie Hwy., Ft. Wright on Wednesday, November 2, 2016 from 3:00 PM until Mass of Christian Burial begins at 6:00 PM.