“Big Brother” (President Obama) Vs. Little Sisters Of The Poor 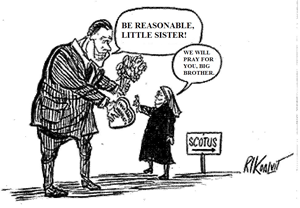 “We don’t understand why the government is doing this,” states Sr. Loraine Marie Maguire, Mother Provincial of the Little Sisters of the Poor.

Good will tolerate evil, but evil never tolerates good. As throughout history, there have been those who have insisted that there are no moral absolutes, that nothing is intrinsically evil. On the other hand, those who hold Judeo-Christian principles understand that there are moral absolutes, and some acts are always intrinsically evil, regardless of the circumstances.

A present-day example of this is President Obama’s administration threatening to impose unbelievable penalties on the Little Sisters of the Poor, and other religious organizations, if they refuse to provide their employees with the healthcare plan that provides, free of charge, coverage for contraception and abortifacients.

Under the Affordable Care Act (Obamacare), the Department of Health and Human Services (HHS) has mandated that which is not in the statute, i.e., that insurance coverage must pay for contraception and abortifacients.

HHS initially stated that it would grant “religious employers” an exemption from the mandate. However, HHS defined “religious employer” so narrowly that it did not extend to schools, hospitals, or other charities operated by religious organizations.

After there was public outcry against such action by the HHS, supported by President Obama, HHS offered religious employers the so-called “opt out” from the mandate. If the religious organization would file a form stating their objection based on religious beliefs, HHS would notify the religious employer’s insurance plan that it was required to notify the employees that they would be provided contraception coverage at no charge. HHS claimed that in this way the religious organization was not paying for someone’s contraception or abortifacients, but that the insurance company was providing it free.

Since insurance companies provide nothing “free,” any amount of legal gymnastics doesn’t obscure the fact that the health insurance company will calculate into the insurance premium the cost of “free” contraceptives and abortifacients, which means the religious organization will pay for something that is intrinsically evil.

Little Sisters of the Poor

On March 23, 2016, the United States Supreme Court heard oral arguments in the case of Zubik vs. Burwell, in which the federal government is insisting that it has the right to force the Little Sisters of the Poor to comply with such an immoral mandate.

“We Little Sisters of the Poor are a group of women who make religious vows to God. We dedicate ourselves to serving the elderly poor regardless of race or religion, offering them a home where they are welcomed as Christ, cared for as family, and accompanied with dignity until God calls them to Himself. We have done this for more than 175 years,” states Sr. Loraine.

“But now we find ourselves in a situation where the government is requiring us to include services in our religious healthcare plan that violate some of our deepest held religious beliefs as Little Sisters.

“It’s also hard to understand why the government is doing this when one-third of all Americans aren’t even covered by this mandate, and large corporations like Exxon, Visa, and Pepsi are fully exempt, yet the government threatens us with fines of 70 million dollars per year if we don’t comply. 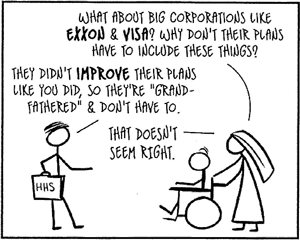 “It is a privilege for us to care for the most vulnerable members of our society; serving them, comforting them, being a loving and healing presence in their lives; just being a ‘Little Sister to them’ is our joy.

In a recently filed brief to the U.S. Supreme Court, the Obama administration admitted that there really was no need to force religious organizations to comply with this mandate. As stated by Mark Rienzi, Senior Counsel with the Becket Fund for Religious Liberty, “The government has now admitted, ‘yes, we can get people contraceptives without involving nuns,’ …That’s a pretty logical point. It shouldn’t have taken five years of litigation to admit that, but it’s good that they have admitted it.”

It has been obvious all along that the Obama administration could direct the HHS that in cases where employees are not provided coverage for contraceptives or sterilization or abortifacients under their healthcare plan, those employees could go to the exchanges set up under Obamacare and obtain such coverage at a cost determined by HHS.

Obama’s reluctance to do so shows his determination to coerce people in organizations, whose religious beliefs would be violated if they were forced to pay for contraception and sterilization or abortifacients, to participate in such intrinsically evil acts.

Another religious organization which has demonstrated its courage in taking the Obama administration to court has been Oklahoma Wesleyan University, whose president, Dr. Everett Piper, stated: “Instead, the Obama administration has exempted billion-dollar corporations for reasons that have nothing to do with religion and is targeting Christian institutions like us, under threat of millions of dollars in crippling fines, to carry life-ending drugs like the week-after pill in our employee health insurance plans – against the beliefs and mission of our school and against the beliefs of the Oklahoma Wesleyan women who are eligible for these plans.

“In attempting to force us to comply with an unjust edict that tears at the very heart of who we are, the government is attacking the very motivation that drives and inspires us to serve this next generation.”

Other Examples of Religious Persecution

Another example of religious persecution by the government has been cases where Catholic adoption agencies in several states had been forced to cease operations rather than to place children with homosexual parents. Again, women who are dealing with placing their child for adoption, couples seeking to have a child they could love, and a child who needs a mother and a father, are denied the services of these Catholic adoption agencies. Why? Because these charities refuse to participate in an intrinsically evil act demanded by those who cry that those who do not accept homosexuality are intolerant, while not tolerating anyone who dares not confirm them in their evil.

The National Abortion Rights Action League, the zealous promoter of abortion and contraception, view the Little Sisters of the Poor as merely a “social service organization,” and not “a religious enterprise,” since the Sisters employ and minister to “people of all faith and no faith.”

“We offer the neediest elderly of every race and religion a home where they are welcomed as Christ. We perform this loving ministry because of our faith and cannot possibly choose between our care for the elderly poor and our faith, and we shouldn’t have to.” 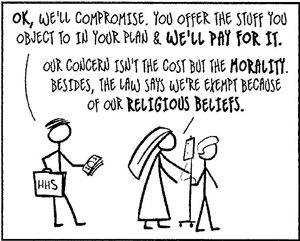 On March 29, 2016, the U.S. Supreme Court made an unusual request that both sides submit additional briefs detailing “how contraceptive coverage may be obtained by petitioners’ employees through petitioners’ insurance companies, but in a way that does not require any involvement of petitioners.”

Such a request obviously discloses that the ultraliberal members of the Court are a little squeamish about crushing the Little Sisters of the Poor.

In the Hobby Lobby case, Justice Ruth Bader Ginsburg, in her Dissenting Opinion that religious exemptions “were for individuals only, and did not extend to a business or privately held corporation,” and that religious beliefs are not exempt from government mandates when they “significantly impinge upon the interests of third parties.” 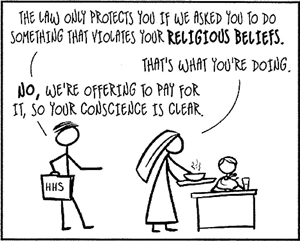 So what is the answer to Sr. Loraine’s question: “Why the government is doing this.” Is it that Obama does not want the federal government to incur the expense of providing free contraceptives, sterilization, or abortifacients? Or is the motive that the Obama administration wants to make Christian groups appear to be opposed to so-called “women’s reproductive rights”? Or is the real motive of the government to force those who hold the Judeo-Christian principle of the sanctity of all innocent human life, to not only tolerate contraception and sterilization being made available through healthcare plans, or killing of unborn children by abortifacients, but also to require such people of faith to participate in these intrinsically moral evils 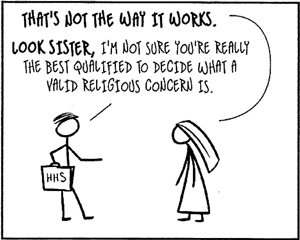