Last November, the Council of the District of Columbia voted 11 to 2 to legalize assisted suicide, joining six other states. Such an action will only encourage the assisted suicide/euthanasia movements throughout the country.

A statute legalizing assisted suicide puts the most vulnerable people at risk. People who are sick, poor, and the elderly will be the target to be pressured into ending their lives by those who have deemed their lives unworthy to be lived.

In some states, health insurance companies have declined to pay for necessary treatment, while offering to compensate those who assist others in taking someone’s life. One would be naïve to think that the costs of caring for someone, which would obviously be more expensive than the expense of assisting someone in suicide, is not a strong motivation.

Assisted suicide no doubt will also lead to changes in the mental attitude of the medical profession. Instead of feeling bound by the Hippocratic Oath, to do no harm, the doctor will see his role as not one of healing but one of killing the patient.

Like the assisted suicide law in other states, the D.C. law requires no accountability or transparency. Even though death is intentionally brought about, the law requires that on the death certificate the cause of death be deceptively listed as the underlying illness or disability, which in fact did not cause death. Nowhere else in medicine is this acceptable, as pointed out by Congressman Brad Wenstrup (R-OH).

Rep. Wenstrup, a physician and strong supporter of patients’ rights, has been urging Congress to repeal this D.C. statute, stating that it is not a partisan issue, but a human issue. It should be noted that this law does not require any witnesses, much less a doctor, to be with the patient when a lethal drug is administered. Assisted suicide is not limited to just those who have terminal illnesses, nor does it require that the patient be even evaluated for mental illness. So if your mother, who has Alzheimer’s, is not in a state that allows for assisted suicide, you can always take a trip to Washington, D.C., to have her “cared for.”

Little Sisters of the Poor

Sister Constance Veit, LSP, the communications director for the Little Sisters of the Poor, has expressed her deep concern a 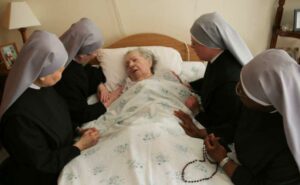 bout assisted suicide. This order of nuns, who although well known in their own right for caring for the elderly who do not have the financial means to care for themselves, gained national attention when they publicly refused to abide by President Obama’s HHS Mandate, that they, like all employers, must provide healthcare insurance which pays for contraception, sterilization, and abortion-inducing drugs. The lawsuit they filed is still pending.

Sister Constance noted: “…that [which] most struck me during the Council’s one-dimensional discussion was their constant invocation of the concept of absolute personal autonomy and choice, and the manipulative use of emotions to justify ‘medical aid in dying,’ as this practice is euphemistically called.”

Sister goes on to quote Saint John Paul II: “Man is no longer able to see himself as ‘mysteriously different’ from other earthly creatures; he regards himself merely as one more living being, as an organism which, at most, has reached a very high stage of perfection.”

“Council members invoked the right over one’s body, the right to personal choices and the individual’s right to privacy versus the state’s right to ensure the safety of D.C. residents,” states Sister Constance. “One member went so far as to claim that respecting another’s wish to control his or her life and death is an extension of the Hippocratic Oath’s injunction to ‘do no harm.’

“No one on the Council acknowledged the reality that none of us is ever truly independent throughout life. Each of us belongs to a family and/or community. Our personal decisions are never really ours alone; they always have an impact on others, especially those closest to us. Saint John Paul II spoke of a distorted notion of freedom ‘which exalts the isolated individual in an absolute way, and gives no place to solidarity, to openness to others and service of them.’ He also wrote that suffering exists in the world in order to unleash love. This love is expressed through the sincere gift of self to those who suffer, creating a cycle of compassion and solidarity.

“But what did you do to relieve your loved one’s terrible suffering?” Sister Constance continues. “How did this experience make you a better person? What did you receive from your loved one in their final days that you would not have received if they had checked out early? An outlook shaped by these questions could make all the difference because it would guide our hearts toward effective, loving responses to the terminally ill, rather than pity, condescension or apathy.

“In the document entitled To Live Each Day with Dignity, the U.S. Bishops issued the following statement: ‘When we grow old or sick and we are tempted to lose heart, we should be surrounded by people who ask “How can we help?” We deserve to grow old in a society that views our cares and needs with a compassion grounded in respect, offering genuine support in our final days. The choices we make together now will decide whether this is the kind of caring society we will leave to future generations. We can help build a world in which love is stronger than death.'”

Dr. Brian Callister, a physician and professor at the University of Nevada Medical School, relates how some insurance companies have denied his patients life-saving medical treatment coverage, while offering to pay for them to commit suicide.

To support his assertion, he reports two incidents, one where the patient’s home state was Oregon and the other California, both of which have legalized drug-prescribed suicide. When he contacted the patients’ insurance companies, both refused to cover the patients’ treatments, though neither patient was terminally ill but would become so soon if they did not receive the necessary treatment.

According to Dr. Callister, both insurance companies’ representatives, after denying coverage, without being prompted, suggested that his patients consider doctor-prescribed suicide. “Quite frankly, I was stunned,” Callister said. “It’s a lot cheaper to grab a couple of drugs, kill you, than it is to provide you life-sustaining therapy. It’s as simple as that.”

As reported by lifenews.com, Stephanie Packer, a young, terminally ill mother of four, stated that California’s Medicaid plan refused to pay for her medical treatment, while offering to pay for assisted suicide drugs.

In another case reported by lifesitenews.com, two Oregon cancer patients, Barbara Wagner and Randy Stroup, were offered doctor-prescribed suicide by their state health insurance plans, after being denied coverage for treatment.

In another reported incident, Kathryn Judson of Oregon reported that doctors tried to convince her husband, when she was not present, to consider assisted suicide. Fortunately, they switched doctors, and her husband was blessed with five more years.